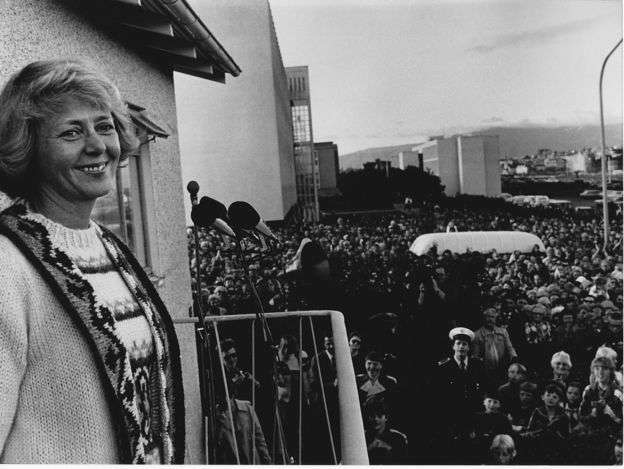 Today is the birthday of one of my biggest role model in life. Vigdís Finnbogadóttir, who served as president of Iceland from 1980 to 1996.

When Vigdís became president I was 8 years old. I was staying on the country side with my mother after having been ill some months before in the hospital. We stayed at this wonderful health guesthouse where my mum worked and I had the freedom to be in the country, surrounded by wonderful people and nature. Truly an unforgettable experience.

When Vigdís got elected president in August, I woke up in the morning early and went to the kitchen where my mum was preparing breakfast for the visitors. My mum was listening to the radio and dancing around the kitchen of joy.

The reason was that Vigdís had become the first woman in the world to be elected president of a Republic.

Against the odds, she managed to win over her male presidential opponents, a single mum of an adopted daughter and a breast cancer survivor.

Growing up with Vigdís as my president influenced me and my peers immensely. It is unimaginable to think about it being different. Children in Iceland even wondered after Vigdís had been re elected for the third time, if it was even possible for a man to hold this office.

So today I am thankful. I am thankful for having had the privilege of growing up with an intelligent, independent, human, no bullshit, emphatic, powerful woman as my president for 16 years.

I am also thankful for having had the opportunity of meeting Vigdís on two occasions in Copenhagen where I was teaching Icelandic children their mother tongue in our beautiful culture house in Copenhagen.

I was starstruck for the first time and only time in my life (even though I had made the unforgettable Pelé for a coffee in Iceland, years before).

Vigdís reminded me of, when we talked some years ago, that there was no higher purpose and privilege than to teach children their mother tongue. Icelandic is spoken by around 330.000 people so her efforts in protecting the smaller languages of the world has been one of her greatest achievements.

Vigdís is a goodwill ambassador of UNESCO for languages.

I think the world should celebrate this day, 15th of April every year as a reminder of an extremely brave woman from Iceland who decided enough was enough and that men and women should have equal opportunities in life to lead and influence our world.

For more info on Vigdís and some of her brilliant quotes

For more info on economical gender equality in Iceland